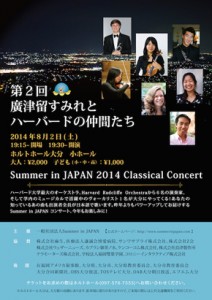 The Second Summer in JAPAN Classical Concert is one of the main events during SIJ 2014 – four violins, one clarinet, one trumpet, vocal, dance and a lot more.
Don’t miss it!

Performers’ profile:
Enchi Chang [Harvard College ’17] (Vn.)
Enchi Chang began studying the violin at the age of 4 and currently studies under Peter Zazofsky. She has toured Europe on four separate occasions, serving as concertmaster of the Boston Youth Symphony and Massachusetts All-State Orchestra and second principle of the National Youth Orchestra of the USA. She has also soloed numerous times with the Boston Youth Symphony and Rivers Symphony Orchestra among others as winners of their respective concerto competitions.

Jerway Chang [Harvard College ’14] (Vn.)
Jerway Chang began studying the violin at the age of five and has studied under Ester DeGrunigen, Magdalena Richter, and Peter Zazofsky. He served as concertmaster of the Harvard-Radcliffe Orchestra, Massachusetts All-State and District Orchestras, and Boston Youth Symphony, with which he performed the solo for Ein Heldenleben and toured Europe on multiple occasions. Other notable performances include solos with the Belmont Orchestra and Rivers Conservatory, as the first prize winner of their respective competitions.

Patrick Sanguineti [Harvard College ’17] (Trp.)
Now in his tenth year as a musician, Patrick has played in a variety of band and orchestral settings. He has distinguished himself in scales big and small, consistently earning a spot in his region’s top invitational Wind Ensemble, as well as the Virginia All State Orchestra, and has had the privilege of playing the offstage Pines of Rome solo with the American Youth Symphonic Orchestra. He is currently principle trumpet of the Harvard Radcliffe Orchestra as a sophomore.

Rachel Orol [Harvard College ’15] (Vo.)
Rachel Orol sang in her first choir at age seven and has been singing ever since. She has performed in a cappella groups and participates in musical theater at Harvard. She recently played Aunt March in the Harvard-Radcliffe Dramatic Club’s production of Little Women. Rachel also enjoys playing the clarinet in both classical and pit orchestras.

Serena Wang [Harvard College ’16] (Vn.)
Serena began studying violin 10 years ago in Berkeley, California. At Harvard, she has played in the Harvard Radcliffe Orchestra, Harvard Baroque Chamber Orchestra, and the River Charles Ensemble. She also enjoys playing for musical theater productions on campus, including Wonderful Town and Little Women. Before Harvard, Serena played in the Houston Youth Symphony and the Houston Youth Symphony chamber music program, as well as the Texas All-State orchestras.

Sumire Hirotsuru [Harvard College ’16] (Vn.)
Born in 1993 in Oita, Japan, Sumire Hirotsuru started her violin studies at the age of three. She has won various violin competitions both at home and overseas and had her orchestral debut at the age of twelve. Chosen to perform at “Music Festival Argerich’s Meeting Point in Beppu” at the age of fourteen, she has given festival related concerts. In 2009, she was one of the four best top winners and special prize recipient of IBLA Grand Prize International Music Competition in Italy and in 2010 she was on the 2-week tour in the USA which included performances at Carnegie Hall. In 2012 she performed with Oita Symphony Orchestra, her hometown orchestra and held a recital at Keio University. She is a rising sophomore at Harvard College.